Solar systems in the Suski Poviat

Solar system for the local hospital

Lower emissions by 4462 tons per year

Donors:Regional Fund for Environmental Protection and Water Management in Kraków

We protect the Babiogórski National Park

We protect Babia Góra, a Biosphere Reserve listed by UNESCO

We protect NATURA 2000 areas – Babia Góra, Na Policy and others

I.  Description of the domestic hot water supply system

The solar system works to meet the needs of all hospital wards which currently use the central gas and oil-fired boiler room to obtain the heat necessary for the central heating system and the domestic hot water supply system. The boiler room is located in building B, a separate 3-storey building with a basement. The basic fuel used in boilers is GZ-50 natural gas while light fuel oil is treated as emergency fuel. The boiler room is equipped with two steam boilers and one water boiler made by Viessmann providing heat for central heating , domestic hot water preparation, ventilation and other technological requirements of the hospital building complex. The boilers are equipped with gas and oil burners made by OILON. Domestic hot water is stored in 4 hot water containers of 3 m3 each.

II. Duration of the installation process

The project involving the installation of a solar system on the local hospital building was launched and carried out by the Environment Department of the Poviat Starosty, which obtained the necessary funds from the following sources:

Thus the solar system was funded from subsidies in 100%. The only costs incurred by the Poviat were the ones related to the preparation of the project documentation.

The value of the works performed: 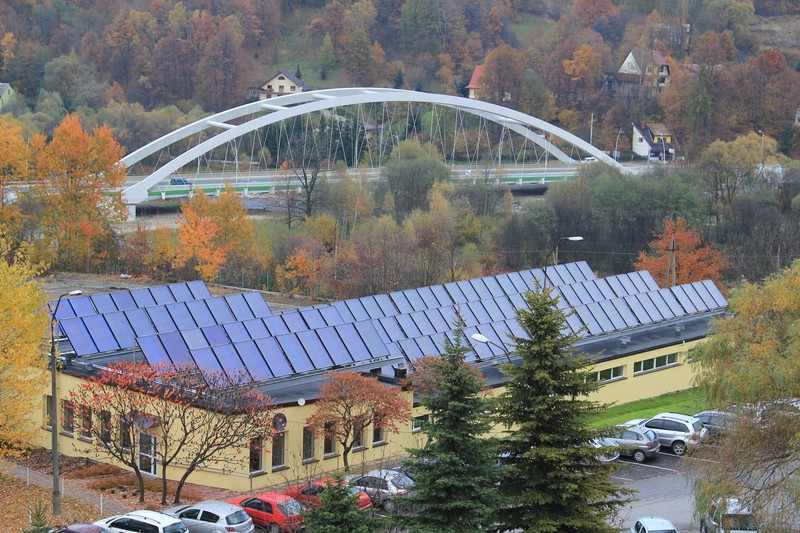 V. Description of the solutions adopted

The plan was to use the solar system to support the process of domestic hot water preparation, thus reducing the need to use conventional energy sources, which, in this case, was gas, and replacing it partially with solar energy.

Energy provided by solar panels was to be used to heat up domestic hot water for the complex of hospital buildings.

1. the total absorption surface of all the collectors installed was 300.12 m2

2. the total capacity of all the collectors installed was 250.79 kW

3. the efficiency of all the collectors installed was at the level of 86%

Thus the appliances installed had better parameters than the ones adopted in the design documentation.

The solar collectors were placed on the support structure of the roof of building A housing the Patient Transport Service located next to the boiler room building using the fixing system developed by the producer of the appliances. The layout and connection of collectors aims to ensure optimum working conditions for the solar system.

Below you can find:

VI. Energy balance calculation and determination of the number of collectors

The size of the solar system, i.e. the number of solar collectors, was determined on the basis of calculations and the guidelines of the solar collector producer. The calculations were made for the summer season, i.e. the period with the greatest intensity of solar radiation lasting from June to August. The geographic location was taken into account and, consequently, the value of insolation per 1 m2 of the area where the system was located. In this case, the actinometrical station in Rabka is the closest to the location where the solar collector assembly is designed and the value of insolation equals  394,200 kWh/m2 here. This value is adjusted using the ratio that takes into account the orientation of solar collectors and their inclination angle relative to the ground level. In this case, collectors are pointed to the south and the inclination angle is 45 degrees, thus the ratio adopted is 0.94.

The solar system is powered by the collectors with the absorption surface of 2.32 m2 and optical efficiency of 83.5%. The calculations of the energy necessary to heat up domestic hot water for the local hospital building complex were made on the basis of the average consumption of domestic hot water per month, as provided by the user.

VII. Characteristics of the system designed

During the system overheating periods the P5 pump should be switched on into the continuous work mode in order to protect domestic hot water against the proliferation of Legionella. The water in the buffer system will be topped up by the existing cold water supply system using softened water, supplied automatically thanks to the SYR system filling valve. The amount of the water supplied is measured by the PoWoGaz cold water meter.

The solar system includes insulated solar tubing. The solar liquid circulating between the solar collectors and the WC1 plate heat exchanger is the water solution of propylene glycol with additives.

The liquid in two other circuits is water.

This is a pressure system where the circulation of heat carriers is forced by circulating pumps. The system is secured against excessive pressure growth by safety valves and expansion vessels.

The tubing of the solar system runs on the roof of the Patient Transport Service building and it will be led into the technological channel connecting buildings A and B.

Using the channel, the solar tubing will be connected to the room housing buffer tanks, the domestic hot water tank together with the equipment securing it, circulating pumps, plate heat exchangers and the automation system for the solar system designed.

The dimensioning of the solar system was made on the basis of the guidelines provided by the solar panel producer.  The tubing diameter selected makes it possible to achieve the required flow which enables the system venting.